On the first day of this July, many Yemeni cities, media and social network sites witnessed a different artistic day for celebrating the “Yemeni song”, after a group of young people and activists launched an initiative to designate this day as an annual holiday on this occasion. It witnessed a great interaction on the communication sites. This prompted the Ministry of Yemeni Culture to adopt it officially under the name ”Yemeni Song Day”.

This initiative came as a response to the Houthies’ fight against singing. Several local radio stations have allocated hours of broadcasting times to celebrate Yemeni Song Day, and among those radios, which were monitored by the “Yemeni Blog” correspondent in Sana’a, “Yemen Times” broadcast, “The Voice of Yemen”, ” Panorama FM”, “Grand FM”, and “Alwan FM”. 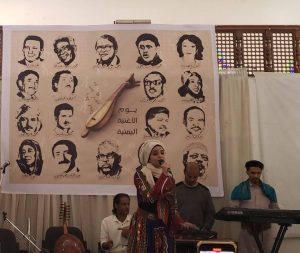 In the corridors of the Culture House in the Ministry of Culture, which is under the control of Iranian-backed militias, an artistic event was held, organized by a number of initiatives and youth groups, in which the artists sang, like, Fatima Muthanna, Marcel Nay and Ibrahim AL-Qawas.
In addition, a concert was held in the Yemeni Story Club, for the artists Mahmoud Al-Junaid and Haitham Haidar, who performed instrumental music with guitars and a mixture of melodies for traditional Yemeni songs.
At last but not least, a number of popular artists performed some popular songs in Tahrir Square.
, “They tried to prevent singing in the countryside of Sanaa, and the people responded by singing, nominating an official festival to themselves… such a response!” commented the former minister of culture Khaled Al-ruwaishan. ‘Our people are alive and our souls are glowing despite of all the pain.” He added.
Couple of Houthy armed men have stormed Al-Qafry’s wedding house in Jala/ Belad Al-rus region (32 km south of the capital, “Sana’a”), to prevent a famous artist from singing.
It all came as an execution of orders, given a few days before the incident, by the Governer of Sana’a Abdul-baset Al-hady, who was appointed by Houthies.
Also, he ordered the adminstrators of the Local Councils to prevent artist from singing in wedding halls and public places.

Meantime, other Yemeni artists and social activists have criticized the Houthies policy of banning singing.
‘The headquarters of Houthie’s Political Council in a building (home of the lucky ones as he call it) was full of wine, singing and all luxuries.
And now they even prevent ordinary citizens from celebrating with songs in their wedding parties! Such a terrible unscrupulous group in which leaders enjoy a comfortable life while ordinary people are deprived from the most basic rights’ tweeted Ali Al-bukhaity.
As for the artist Abdul-elah Al-ba’dani, he called them “the enemies”. ‘Any extremist thinking which threats or underestimate our cultural, literary or artistic heritage is considered as an enemy’ said he. ‘We oppose those ideologies and so should do every true Yemeni citizen who belong to one of those disciplines, by reinforcing our heritage and identity’. He added.

Houthies’ .. a history of incitement against singing

Right after the revolutions in the middle east (known as Arab Spring), Houthy Militia took over Sa’da Governorate in 2011. Then they attacked all studios in the city and damaged confiscated the cassettes of the Yemeni artist Ayoub Taresh. Houthies have always suppressed singing and banned it in wedding and graduation parties in their dominated regions. 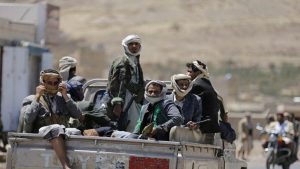 According to some citizens to Yemen Blog, Houthies have obliged their members to celebrate their weddings with “Zamel” (kind of instigating songs for fight with drums only), or religious preaching which include doctrinal and extreme ideologies in conformity with their Orientations.
It went to the point where Houthies have prevented singing in graduation parties both in schools and universities using weapens.
An example is an incident happened two years ago with the female students of Al-furat school ,who were prevented by armed women, from having their graduation party at Al-qemma Hall because they wanted to play music and songs Houthies have a long history of fighting arts.
Back in 2005 after they took over most of Sa’da, they imposed laws preventing artists from singing or playing on musical instruments in wedding parties. After that, in 2008, the same law was imposed on Sa’das’ Government Broadcasts ever since. Houthy Inspectors do a regular check on Audios and internet Cafés, whereas only “Zamel” and political religious preaching are only allowed. Prison is the punishment to anyone violating the law.
Houthy Militia stuck to this law in every region they dominated. In 2014, in the middle of “Amran” city, they stormed the wedding of (Al-Khumairy) family in (Al-Bashiry) neighborhood, to prevent the popular artist (Nabil Al-Amush) from performing. He was dragged after that into one of their newly established prisons, at a time, in the sports stadium of Imran.
Only the mediation of some Tribal and his Pledge of not singing again helped him having back his freedom.
In the 12th of Jan 2015, the “House of Arts” in Sana’a was shot by Houthy armed men under the pretext of preventing intermingling of men and women.
In the 11th of Sep 2017, the popular artist (Sadeq Al-Sabbary), the singer of the famous song (where is my salary) was arrested.
In 24th of Sep 2017, the popular artist (Alaa Al-kord) was arrested for performing in a wedding party in Ibb city.
In the 6th of Dec 2017, the popular artist (Hamoud Alsemah) was arrested by Houthy armed men from his house in Hadda sreet/ Sana’a city, and took him to an unknown location before they .released him later
In the middle of Dec, the administrator of the Central Security threatened the young singer (Aseel Abu-bakr) of arrest in case he sings in the wedding party of house (Thue’yl), which took place in one of the halls of the capital of Imran Governorate. The Houthy armed men never left the hall till the family pledged of never allowing singing in the wedding.
In August 2019, the artist Abdullah Al-sa’di was arrested and jailed for singing.
In Jan 22nd 2020, an ice-cream vendor called Sami Al-rukhmy was arrested and moved to one of the police departments in (Dhamar) for playing music. And he was not released until he wrote a commitment pledging of never doing it again.
In the 21st of the past August, Houthies arrested the artist (Khaled Al-baidhani) with other escorting him to one of their prisons in (Al-bhaida) because they were performing in a wedding party. Five days after the arrest they were released by tribal intervention. Around the same period in Mahweet, Houthies imposed fines for the people who want to invite artists to perform in their wedding parties.

Houthies seem have an ongoing hostility for singing. An armed
As a reaction to Houthies’ suppression for Arts, Yemenis appoint a festival for “the Yemeni Song”

man tries to assassin the young artist Shehab Al-sha’rany, in the fifth of July of the current year. Al-sha’rany was taken to a hospital in Sana’a after being stabbed for four times with a dagger on his nick. He is still in a critical condition till the time of writing this report. Some activists consider this crime as a result of some Houthies leaders continuous incitement against artists.